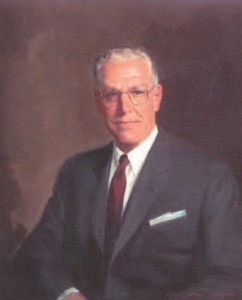 Russell CurtisCurtis Dyna-Fog,  Ltd. was founded  in 1947 in Dayton, Ohio by Russell R. Curtis and his father  W.H. Curtis. Originally named Curtis Automotive De- vices, the company specialized in manufacturing valves for the automotive and aircraft industry. Before joining his father in business, Russell Cur- tis attended the University of Cincinnati where he graduated in Aeronautical Engineering and later completed a cooperative work program at Wright Airfield (now Wright Patterson Air Force Base).  At the time, Wright Airfield was the center of all aircraft technology. In 1952 Curtis Automotive Devices moved to Bedford, Indiana to be closer in proximity to its major customers. The company began producing other types of components for the aircraft industry and began doing some development work using acquired Pulse-Jet Engine Technology. During Russell Curtis’ employment at Wright Airfield in Dayton he was first exposed to a Pulse-Jet Engine, a unique device used to power the German VI rockets during the war. The Pulse-Jet was comprised of the basic technology that would later be the foundation for his companies future. Russell and his father continued working on the possibilities of producing a pulse-jet fogger for use in commercial applications. One of the first pulse-jet products they produced was the Dyna- Jet “Red Head” miniature  engine for use in model rocketry. Initially developed in 1945 by a long time associate of Russell Curtis, William Tenney of Aeromarine Company, the Dyna-Jet once held the American Modelers Association land speed record  at 179+ MPH! A speed amazing at the time, especially when only standard grade gaso- line was available. After years of refining existing designs, by 1954 the first commercially available pulse-jet mosquito fogger (The Curtis Junior Model) was being produced. In the first year more than 500 machines were sold throughout the country. By 1956, demand  grew  to the point  where  more than 4000 machines were being produced each year. As a result of increasing demand for the pulse-jet machines, Russell Curtis moved the company in 1958 into a newly constructed 20,000 square  foot facility in Westfield, Indiana.